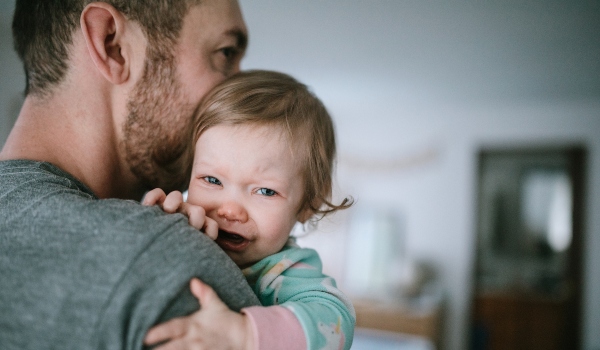 How empathy is developed in toddlers is important for later social development in children – greater empathy in toddlerhood is linked to later popularity, friendship quality and social competence.

The development of empathy in toddlers is important for children’s later social development in children – greater empathy in toddlerhood is linked to later popularity, friendship quality and social competence. A new study helps us understand the role that mothers and fathers play in this process.

The experimenters observed 156 British two-year-olds with their mother or father responding to a life-like baby doll starting to cry in the same room. The researchers found that the more the parent talked to the toddler about the crying, the more attention the toddler gave to the baby. When parents talked more, the toddler was more likely to describe the emotion they saw in the baby – being “sad”. They found no differences in how mothers and fathers talked to their boys or girls.

The similarity of empathy responses between boys and girls and between mothers and fathers was striking. Only one small difference was observed between boys and girls—girls offered a verbal description of the emotion of the crying baby (e.g., “sad”) more often than boys did. And two very small gender differences were observed among the four possible combinations of boy/girl, mother/father. Boys expressed more distress in the presence of their mother than their father, and girls demonstrated more empathic concern in the presence of their father than their mother. Perhaps by the age of 24 months, boys are already starting to constrain their expressions of distress in the presence of an adult man. Similarly, perhaps girls have already become used to seeing their mothers engaged in soothing activities and hang back more if they are with their mother.

The study confirmed one important finding also found in other research on how empathy is developed: there is a big difference between a toddler showing distress in response to a crying baby and the same toddler showing an empathic response. Some toddlers show distress and are able to contain their response and go on to respond to the baby in a concerned way. For others, the distress becomes too much and they cannot interact with the crying baby, focusing instead on their own distress. There is a link between showing distress and showing empathy only when the toddler shows the capacity to understand and describe the situation.

The study took place in the East of England amongst educated families recruited before their child’s birth in local hospitals. The life-like doll was introduced by the researcher (as “George” to boys and “Charlotte” to girls) and put down for a nap close to where the toddler and parent were to play. The parent was instructed to respond to their toddler’s interest when the remotely controlled baby started to cry, but not to respond if the toddler did not. The toddler’s empathy reactions were measured: their attention to the crying baby, their personal distress, the labelling of the baby’s emotions (“sad”, “hungry”, etc.) and their spontaneous action to help the baby. Everything about the situation was set up the same way for mothers and fathers.

Toddlers’ empathy responses varied widely in the study: 70% showed attention to the crying baby, 39% displayed moderate or strong distress, and 44% described the baby’s feelings. Only 14% acted spontaneously to help the crying baby. Toddlers who offered a description of the baby’s feelings were more likely to display a spontaneous action to help the crying baby. Meanwhile, in line with previous observations, there was no correlation between a distress response and a show of empathy. In contrast to earlier research, no gender differences were observed between boys and girls, other than the slightly greater likelihood that girls would use words to describe the baby’s emotions.

If you believe in the work we are doing here at The Good Men Project and want to join our calls, please join us as a Premium Member, today.

All Premium Members get to view The Good Men Project with NO ADS.

Need more info? A complete list of benefits is here.

The post How Is Empathy Developed? the Role of the Support of a Mother or Father appeared first on The Good Men Project.