Your cart
I am all for retaining character and charm, but I have just got out my putty knife and spackled up 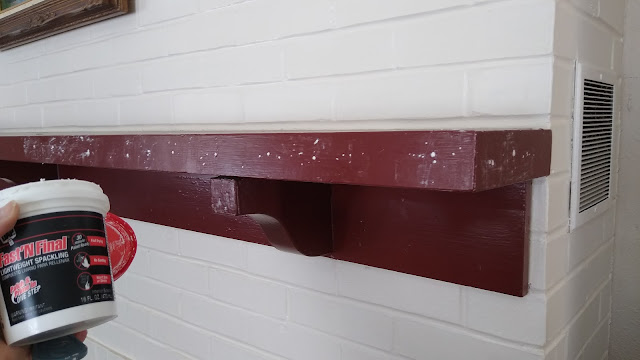 The mantle on this fireplace has been used and abused for many years. I think every Christmas for the last 100 years someone has tacked, nailed, thumbtacked or screwed into this poor mantle.

Once I got all of the holes spackled and dried, I lightly sanded over it with a fine light grit sandpaper on my little Skil Octo sander. I love that handy tool with its little pointy tip that can get into tight corners. 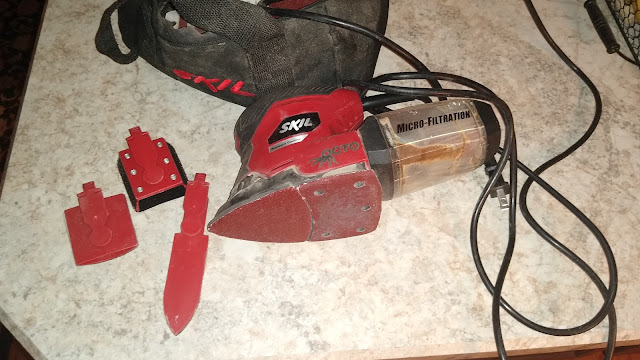 Steve has a larger palm sander and belt sander, but this little one one is perfect for me.

As I sanded, I could see that the previous color under this reddish-brown had been black and underneath that it had been white. Kinda like excavation of the history? The mantle is not fine craftsmanship, it's a rather rough and rugged. But I wanted to get rid of the holes as well as the drips and runs in the paint from previous coats put on by other people long ago. 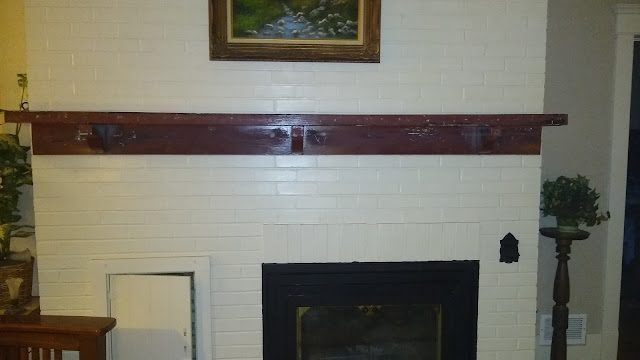 I am going to paint it more of a burnt sienna brown than the raw umber reddish color that it is now. I will use the same color paint that is in our kitchen on the cabinets and island. I have some left over from when we made the coffee bar / wine rack. 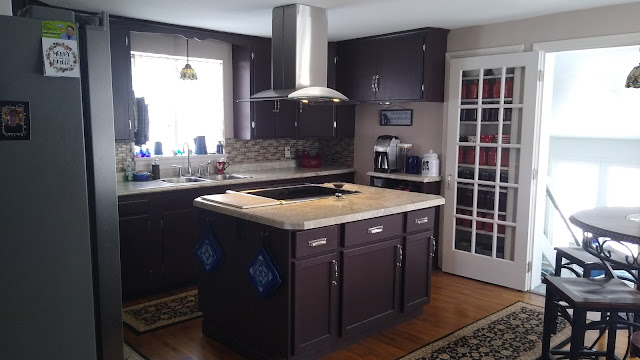 Then the mantle will coordinate better with with the woodwork and furniture in the room... as well as my beloved oil painting hung up above, painted by my good friend Rosie DuPuy of Bethel, Missouri. 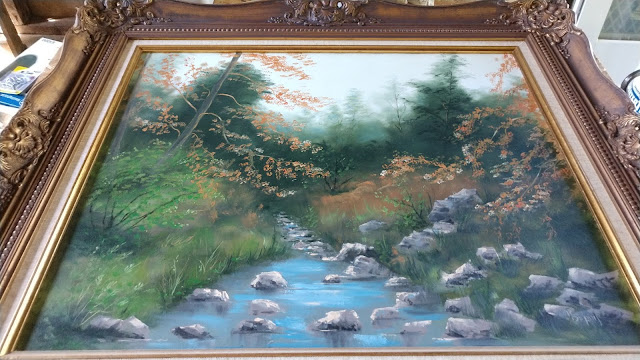 The mantle is all ready for tomorrow for the first coat of brown paint. I will work on it once it's daylight, rather than setting up the halogen work lights tonight.


The little handle on the firewood cubby was quite dilapidated and coated in layers of paint. I removed it and I could tell that of course the fireplace was the present pearly white ivory color, but underneath there had been a layer of a golden yellow, and underneath that there had been a bright layer of barn red! Probably painted to match the fireplace bricks and hearth that long ago that were red clay? 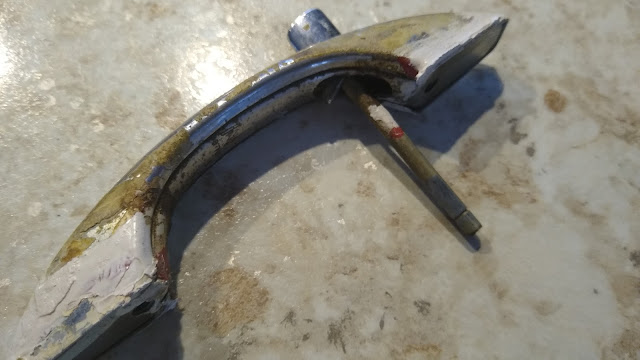 At a recent trip to the ReStore in Marinette, I found a cute little old-fashioned looking handle for a mere 50 cents. I think it will be much more appropriate for style and character. 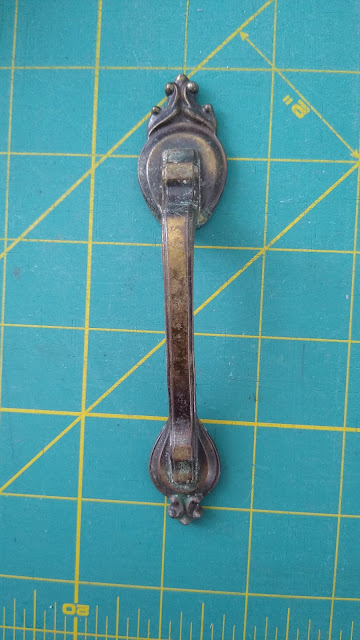 Today I gave it a spray of black paint and tomorrow it will be dry enough to mount on the firewood cubby door.

Our electrical rewiring project has almost come to a finish. The last few outlets are now done but I accused Steve of sitting down on the job! 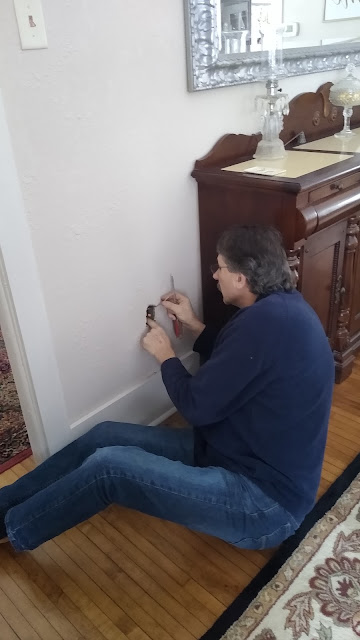 It brings peace of mind to see the raggedy old fabric wrapped wires removed and replaced with good sturdy grounded electrical wiring and proper outlets. We will tackle the ceiling lights later in the spring when things warm up in the attic.

Speaking of temperatures, the weather has turned colder now. Although the last storm kinda missed us, we have another one coming in tomorrow night. More snow and more wind too.

The dogs have been getting a little cabin feverish so we took them out for a romp in the snow --- all the way to the back end of the property. They found lots of interesting smells to root their noses under the snow... and came up covered! 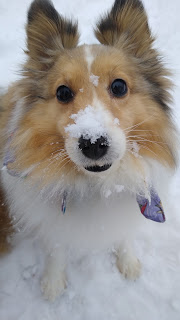 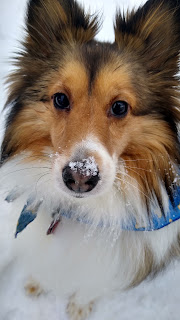 They love chasing and ramming around in the snow. It was crisp and cold, but the dogs didn't seem to mind at all. They dodged and dashed around our feet as we walked back to the end of the 2 and a half acres of our big backyard.

We tossed them snowballs and played some fetch. They followed us around and made sure we paid them a lot of attention. 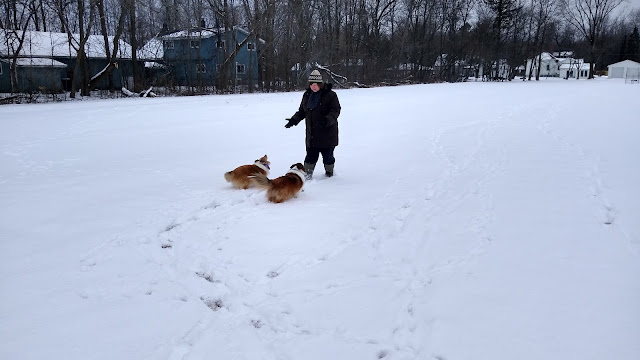 Had to get a pic of my rugged outdoor hubby...
in his Designer Wisconsin Winter Clothing!
Ahhh my Carhartt wearing guy
complete with his Stormy Kromer hat
and Sorel boots with felted wool liners. 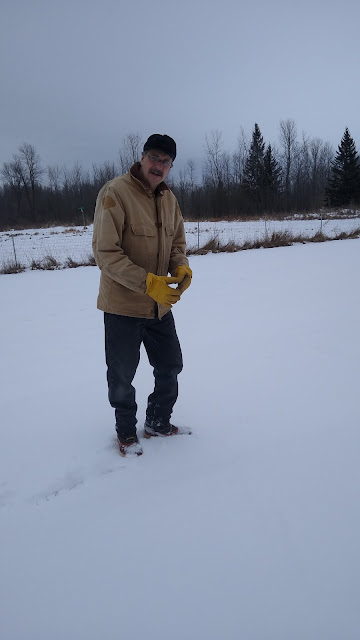 Here's a cute little video I shot of the dogs
doing what they do best:
We got the dogs back into the house and we warmed up. I made a big old pot of chicken vegetable noodle soup. I start out with one of those Bear Creek soup mixes, but in a bag of shredded chicken meat from my freezer, and add a lot more vegetables and noodles. It makes a big enough pot that we can freeze some and have some for lunch again the next day too. 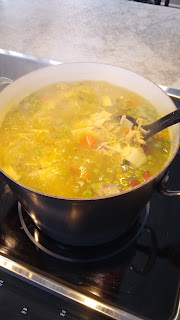 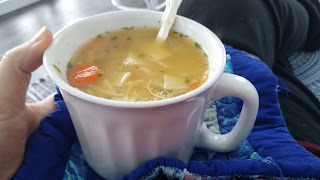 Even though it was bitterly cold this morning, the sunshine coming in was totally delightful. We sat at our table in our stained glass surrounded nook in the kitchen, enjoying our coffee this morning. 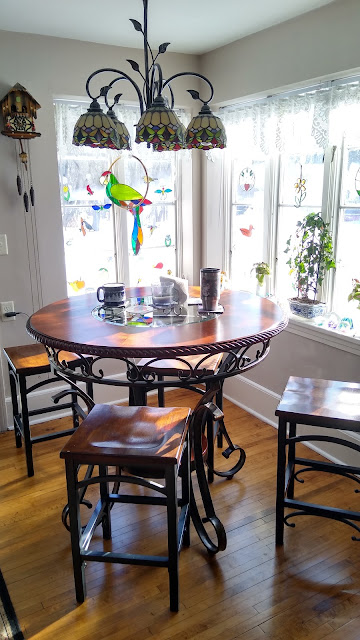 Days like this make me so grateful and happy that we are cozy and warm in our house. It's been a long line of tasks to get it the way we have it now. Time to sit back and enjoy it a bit. We sat in the kitchen almost all morning. Going over shopping lists, clipping coupons from the paper, and planning out a few more house projects. We might hold off on my kitchen sink for now--- (sigh) because we have a few more pressing things to replace or repair first. Gotta prioritize. The morning passed quickly as we sat in the sunshine.
The dogs were lapping up the sunshine too. 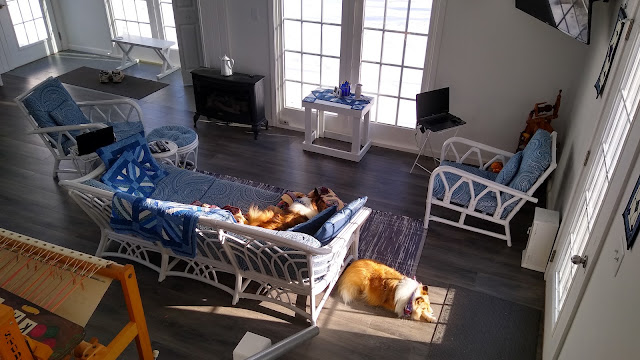 Steve ran to the hardware store and the post office,
while I started the laundry and housework.
The dogs?
Yup.
Still soaking up the rays. 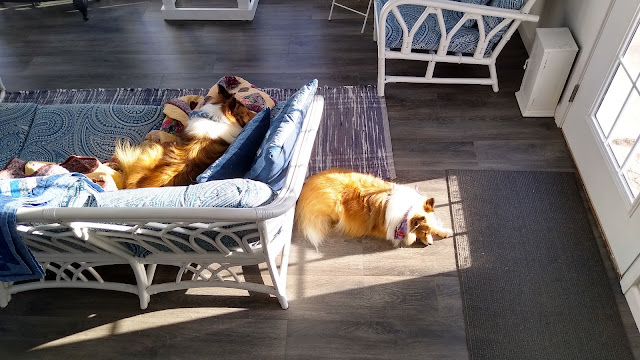 This morning we discovered fresh deer tracks in the backyard. Those little stinkers came right up to the back windows of the She Shed and were gazing in watching us last night! 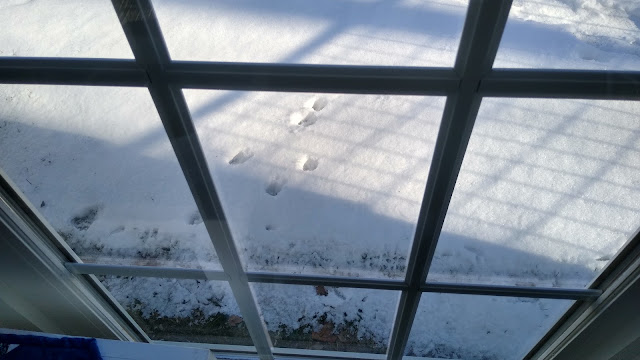 I think they were wondering when we were going to fill the bird feeders? They have been standing up on their hind legs and battering it with their front legs to knock out the seeds! They have been wandering back and forth from the feeder to the house, thinking they have to put in an order for a refill? 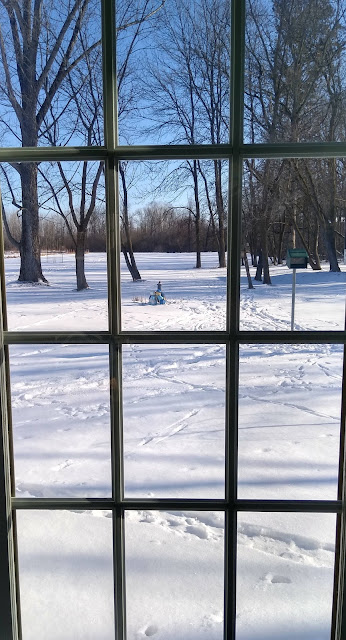 We have been refilling the feeders almost daily, and I think more is going into the deer bellies than in the birds!
We ran to the grocery store this evening for a few quick things. Tomorrow the snow will start, following by the cold and winds. The weathermen keep changing the amount totals in the forecast, it's anybody's guess as to how much we will get?
Share Share on Facebook Tweet Tweet on Twitter Pin it Pin on Pinterest
← Back to News